THE VARIOUS FATES OF THE GÄVLE GOAT

The history of the Gävle goat begins in 1966. Here, you can read about what has happened to the giant straw goat from the beginning to present time.

The history of the Gavle Goat begins in 1966, when it was erected on Castle Square in Gävle for the first time. It was the association of tradesmen of South Gävle who decided to build the goat in order to attract more visitors to the south side of the Gavleån river.

What we know for sure is that Stig Gavlén made the first outlines of the Gavle Goat on a napkin at the café Konditori Lido Söder. His brother Jörgen Gavlén asked his colleagues at the local fire station for help and built the first goat. The cost – about SEK 10,000 – was paid by Harry Ström.

Since there are no remaining protocols from the tradesmen’s association that year, Stig Gavlén, Harry Ström and Inga Ivarsson will all remain potential innovators for the Gavle Goat.

On the 1st of December, the 13 meters tall and 7 meters long goat was put into place for the first time, weighing in at 3 tonnes. On New Year’s Eve, at midnight, the goat went up in flames. The perpetrator was found and charged for serious vandalization.

In year 1970, the first goat that was put up got destroyed within six hours. Two very drunk adolescents were connected to the crime. With the help of different contributors, the goat was put up again – this time made out of reed.

By 1971, the tradesmen of Gävle were fed up with burned goats and quit the goat making business. The Natural Science Society of Vasaskolan took over. Their smaller goat was smashed into pieces.

In 1973, the goat faced an uncertain destiny.

In 1976, the goat was hit and destroyed by a greaser car.

In 1978, the goat was once again smashed into pieces.

In 1979, someone burned the goat even before he was put up. Another goat was built and drenched in flame retardants, but also that one was sabotaged and destroyed.

In 1980, the goat was burned down on Christmas Eve.

1985 – Measuring in at 12.5 meters, the goat enters Guinness Book of Records for the first time. Burned down in
January.

In 1986, the tradesmen of Gävle commence the goat building again. From this point on, there are always two goats; the Tradesmen’s goat and Vasaskolan’s goat. However, the large goat was burned down on the night before Christmas Eve.

In 1987, the goat was heavily impregnated with fire retardants. Nevertheless, someone burned him down during the week before Christmas.

In 1988, the goat made it through completely unharmed. He also became a betting object on British betting charts.

In 1989, the goat was put on fire even before he was constructed. Money for a new goat was raised from the public; however, the new goat burned in January. Two months later another goat was constructed, this time for the recording of the movie ‘Black Jack’.

In 1990, the goat was left unharmed. This year, many volunteered as guards.

In 1991, the goat was accompanied by a commercial sleigh, which turned out to be an illegal construction. Someone put the goat on fire on Christmas Eve’s morning. He was rebuilt in order to go to Stockholm for a campaign against the shutdown of the local military regiment, I14.

In 1992, the goat was on fire within eight days; also the goat from Vasaskolan was burnt during the same night. The goat was rebuilt but put on fire again on the 20th of December. The arsonist of all three goats was arrested.

In 1993, the goat was once again included in the Guinness Book of Records. This time it was the goat from Vasaskolan that made the qualifications, 16 meters tall. Left unharmed.

In 1995, it burned on Christmas Day morning. He was rebuilt in order to partake in the festivities when Gävle celebrated 550 years as a city.

In 1996, he was guarded by a webcam for the first time. The goat made it through without being put on fire.

1997 – Besides smaller damages caused by fireworks, the goat was unharmed.

In 1999, he burned only a few hours after he was put up. The goat was rebuilt and put up again by the time of St. Lucy’s day.

In 2000, the goat was burned just a few days before New Year’s Eve.

In 2001, a 51-year-old American visiting Sweden put the pride of Gävle on fire, just the day before Christmas Eve.

In 2002, the people of Gävle enjoyed a completely unharmed goat.

In 2003, the goat burned two days before St. Lucy’s. A new goat, which made it through unharmed, was put up a week later.

In 2004, the goat burned on the 21st of December; only three days before Christmas. No new goat was put up.

In 2005, the goat burned on the 3rd of December. A new goat was put up on the 8th and that one was left unharmed.

In 2006, the goat survived the deed of a pyromaniac on the night before the 15th of December; he was only slightly scorched on his right leg. After that, the goat was left unharmed.

In 2007, the goat was heavily drenched in fire retardants, and was not a victim of pyromaniacs.

In 2008, the goat was not chemically protected; instead, the pure straw was delivered from the producers of Mackmyra Whisky. He burned on the 27th of December.

In 2009, the goat was burned on the night of the 23rd of December. At the same time, the webcams fell victim to a hacker attack, so the pyromaniacs were never caught on tape.

In 2010, the goat made it unharmed. However, someone was plotting to kidnap the goat with a helicopter and bring him to Stockholm.

In 2011, the goat only stood for five days. He was put up in flames as early as the 2nd of December.

In 2012, someone put the goat on fire on the night before the 13th of December. The fire started in his left hind leg.

In 2014, the goat was spared from fire. He also went on a long trip to visit Zhuhai City in China, in order to celebrate that Gävle and Zhuhai had been sister cities for five years.

In 2016, the goat was burned only a few hours after his grand 50th birthday party. His inofficial little brother, built by the students of Vasaskolan, got to fill the void at Castle Square. However, Little Brother was hit by a car on the 5th of December.

2019 was another good year for the Gävle Goat. Sadly, someone set his little brother on fire on the 27th of December.

In 2020, Gävlebocken withstood both fire and virus.

In 2021, Gävlebocken was burned down after being attacked in the night of 17 December. The perpetrator was arrested with soot and ash on him. In addition, everything is on film. The person is sentenced to prison for six months and must pay damages of just over SEK 100,000. 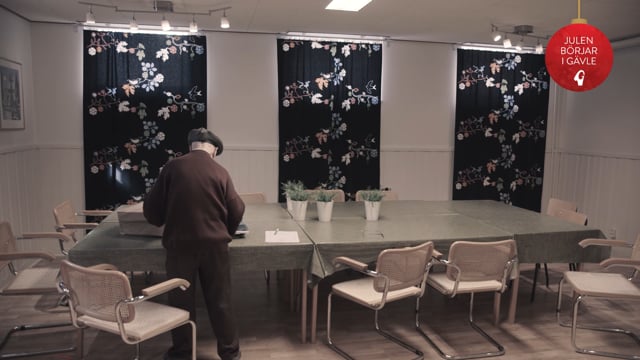 It all started in Café Lido in Gävle. Meet the creator Stig Gavlén and the goat builders who constructed the first Gävle Goat in 1966. 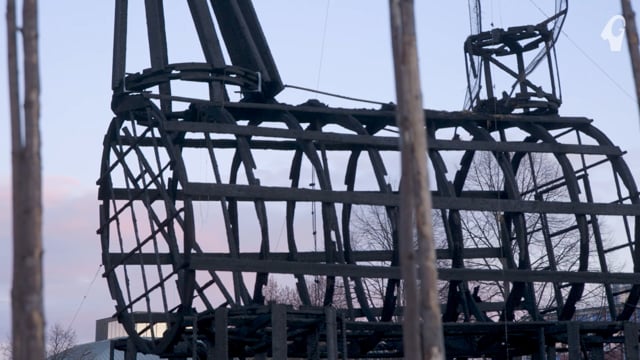 Support the goat. Gävle's hashtag campaign to prevent the goat from being put on fire. 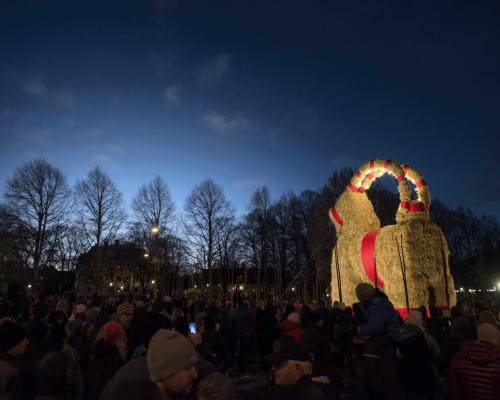